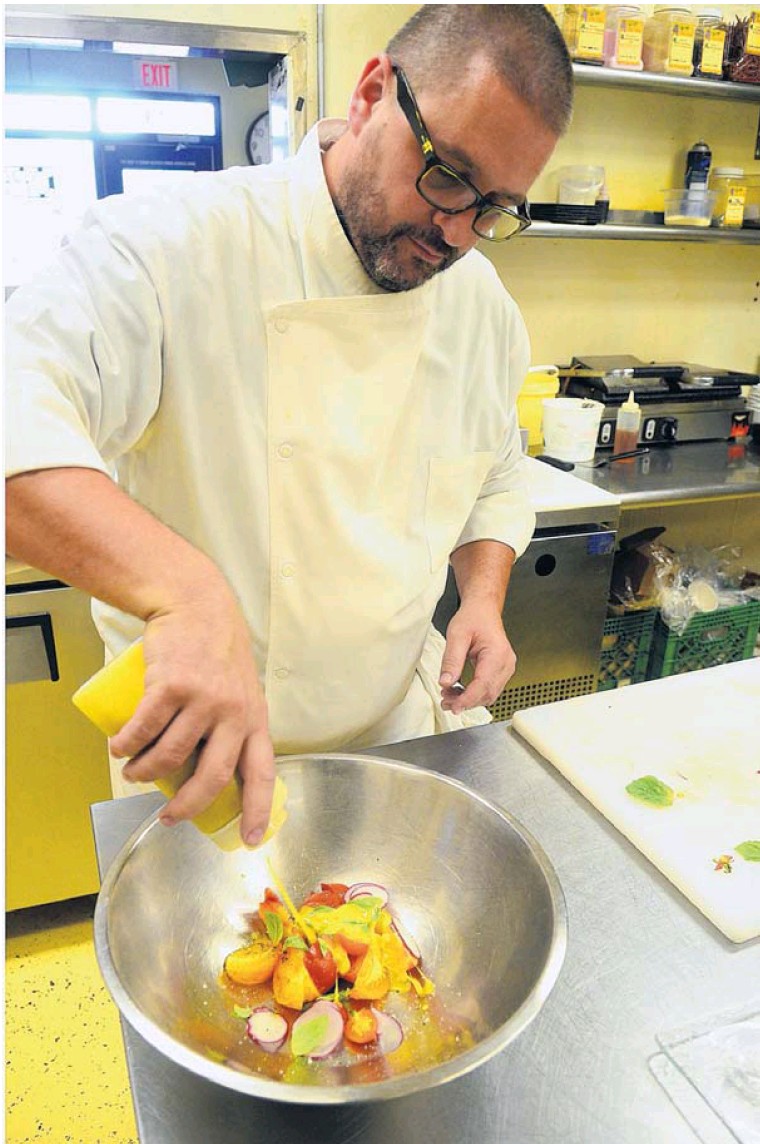 September is magical in New Mexico. The light has softened, the air has cooled and an abundance of fresh produce spills from tables at our local growers’ markets, including mouth-watering heirloom tomatoes with idiosyncratic shapes and quirky names like the mortgage lifter, the Paul Robeson and the radiator.

And for chefs like Maxime Bouneou of Torinos’ @ Home, that means it is prime time for seasonal specialties like an heirloom tomato Niçoise salad.

“Most people don’t know that a traditional salade Niçoise is first and foremost a tomato salad,” explains Bouneou, who should know, because he hails from Nice, France, the birthplace of the Niçoise salad.

“The south of France is rich in produce and fish, but the history of Nice is that it was a poor country, and most people ate whatever was local – basil, radishes, eggs, canned tuna, anchovies from the sea, and fresh tomatoes,” he says. “Our salad is play on that as I use fresh tuna, but tomatoes are the real star of this dish.”

One taste of this salad and you remember that there is nothing quite like the taste of heirloom tomatoes to help us luxuriate over the lingering warmth of a waning summer.

For the uninitiated, heirloom tomatoes are gorgeous, juicy fruit with intensely sweet earthy flavors, a hint of tanginess, a luscious velvety smooth texture, and beautiful skins.

Bouneou, along with his wife, Daniela, own Torinos’ @ Home, located on the northeast side of Albuquerque, tucked in the Market Place at Journal Center. His training took place in culinary school in France and in many fine dining establishments such as Nice’s historic four-star West End hotel where he and Daniela met.

But Bouneou says Torinos’ is designed to be an Italian trattoria, where the atmosphere is casual and the house rule is good food at reasonable prices.

The Americanized Niçoise salad is often served with boiled potatoes and blanched green beans, and French regional variations may include artichokes or fava beans. Whatever the ingredients are, what must not be compromised in this dish is that only the freshest market produce is used and that it is complemented with typical Provençal seasonings. 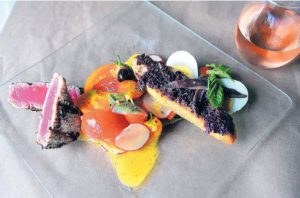 Following regional traditions and recipes inspired by his mother and grandmother, Bouneou uses as many

organic and locally grown and raised foods as possible. He regularly purchases local tomatoes, squash, eggplant, peppers, fresh herbs, garlic, berries, kale, turnips radishes, plums, mesclun salad mix, beef and whatever else he can get his hands on.

Bouneou says that while it’s not always easy to get the quantity or consistency in locally grown food that he would like, as person who truly loves food, he finds it well worth the effort. “Nothing compares to food that is ripe and ready to eat. By definition it cannot travel far. The taste and flavor profile of food grown around the corner is amazing, and it is almost always healthier and cleaner,” he says.

Bouneou remembers regular visits to his grandparents’ farm where every Sunday they would slaughter poultry. “My mother would stuff it with plums, bread and onions and then roast it. Sometimes I put ‘Poulét a la Monique’ on the menu because this was one of my favorite meals.”

What Bouneou can’t buy locally he tries to source from sustainability-focused or family-run businesses. With a menu that often features fish from the Atlantic, he works with an East Coast supplier who posts the catch of the day by 6 am. As long as he gets his online order in by 10 a.m., by noon the following day, he has his fresh fish delivery.

When it comes to Italian-prosciutto and other cured meats, Bouneou works with a small importer in Colorado.

“It’s important to me to support neighbors. We all make this community together, and by supporting each other, we help each other have healthy lives,” he says.

Everything on the menu at Torinos’ is cooked fresh, and that includes all of the sauces, stocks and pasta. Bouneou also bakes and is a chocolatier (just check out his chocolate Easter eggs in spring). At just 39 years old, it’s clear Bouneou knows what he is doing when it comes to running a kitchen, but such is the reward for working hard at his craft since the age of 15.

Bouneou’s philosophical approach to life makes him a bit of a throwback. He says he appreciates simplicity, people and relationships, and tries to slow down whenever possible to enjoy good food and a glass of wine, to tend to his beehives or to restore old cars and motorcycles. He got rid of his cellphone several years ago because he says anyone who needs to get a hold of him knows he is either at the restaurant or not available.

His principles are clear. “Everything about the way to work in a kitchen has changed,” he says. “Everything is about speed and about being profitable. Good produce and organics have become exclusive instead of what just what was purchased out the back door of the kitchen because it was what was local and good. Good food should be for everyone.” 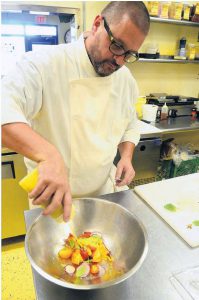 At Torinos’ @ Home, chef Maxime Bouneou takes his inspirations from his hometown of Nice, France, the birthplace of the Niçoise salad. His salad uses fresh tuna, but he says, “tomatoes are the real star of the dish.” (Adolphe Pierre-Louis/Albuquerque Journal)

Bouneou discovered New Mexico in 1995 while visiting a friend when he was on his way to Mexico. The light, the mountains, the village atmosphere all captivated him. He lived in Africa and the Alps when he was small, and says he has always loved places that are a bit remote.

When the husband and wife team decided to leave Europe to pursue the American dream, New Mexico seemed like the right place. Their restaurant endeavors began with a small Torinos’ @ Home tucked in a tight nook in Santa Fe in 2006. But the cost of doing business in Santa Fe pushed Bouneou to try Albuquerque in 2010.

In 2012 the Bouneous also opened Limonata, an Italian street food caffé in Nob Hill that is open for breakfast and lunch. All of the fresh pastries, soups, quiche and lasagna are prepared daily in the Torinos’ kitchen and then transported across town. Their 18-year-old daughter, Marion, manages Limonata.