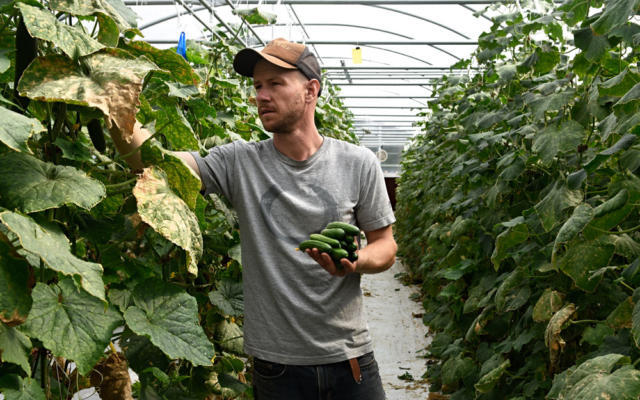 By Denise Miller / For the Journal
Published: Wednesday, August 24, 2016

ALBUQUERQUE, N.M. — The best cucumbers you have ever tried, butter lettuce as sweet as its name, heirloom tomatoes that taste purple and basil so bright that one leaf carries the essence.

So why are these two young guys who grew up in Corrales working so hard to farm? Surprisingly or not, both have a similar answer: they’ve always loved being outside and, in different ways, growing food.

Now they pursue their passion together, which means figuring out how to run a sustainable farming operation that produces quality crops, has a low carbon footprint and pays the bills.

As anyone who has tried to grow food in the desert knows, each of these goals is lofty in its own right. Combine all three and you begin to understand why the Silverblatt-Busers are approaching the age-old art of farming in an innovative way.

In the Corrales greenhouse where extensive rows of food grow hydroponically in coconut husks, where solar panels power the evaporative coolers and where self designed software crunches production data, it’s clear these guys have a vision for what is possible when you marry ingenuity with passion.

“We are balancing technology and back-to-the-land practices. We are trying to figure out how to approach big problems,” says Elan, who at 26 is two years younger than Aaron.

Some of these big problems include how to grow food year-round, how to keep food quality consistent and how to keep resource usage low while increasing yield.

Sometimes it’s basic technology like the transparent roof in the greenhouse that makes an important contribution. Sometimes it’s their computer application that saves the day.

But regardless of the high or low-tech materials and instruments that are being tested and applied, they wouldn’t be anywhere without old-fashioned hard work and dedication that drive the farm’s burgeoning success, including its ability to support both Aaron and Elan plus four employees with a living wage.

Aaron’s been experimenting with crops in Corrales for 10 years, and in that time he has had hundreds of failures. When he was 14 or 15 he remembers being extremely interested in growing food, and by 18 he was sure he wanted to be a farmer. Before heading to the University of New Mexico to study business and entrepreneurship he spent the summer interning at Los Poblanos Organic Farm. He continued farming throughout college, and in April 2015, his business plan for Silver Leaf Farms won first place in the Entrepreneurial Ventures Track. He then finished his MBA with a concentration in accounting.

Meanwhile, Elan took a different path and headed east to Swarthmore College near Philadelphia where he studied molecular plant genetics.

From there, he went to Mexico on a Fulbright scholarship where he researched climate change and food security, followed by time in Serbia where he focused on renewable energy development. Throughout his travels, exploring food and cultures were a recurring theme.

“Food plays a major role in people’s lives for different reasons. Food is universal and can break down cultural barriers. I have found this to be true in my travels as well as here in New Mexico,” says Elan.

While their academic backgrounds in business, plant biology and renewable energy complement each other perfectly, their division of labor is a bit surprising. Aaron studied business and accounting, but he is mainly the plant guy. And while Elan studied plants and energy, he takes charge of the business. “We both do a bit of everything,” says Aaron, “but I’d rather not be the guy making cold calls.”

And while the number of cold calls might be shrinking as they consolidate their customer base, about 70 percent of their business is wholesale and 30 percent is direct-to-consumer. Wholesale accounts include local restaurants, Bernalillo Public Schools, Central New Mexico Community College, La Montañita Co-op and Albuquerque Whole Foods; weekend sales at the growers’ markets comprise the rest.

“Everything is delivered within 24-36 hours of being harvested,” says Elan. “And all deliveries are within a 15-mile radius of the farms.”

All crops are grown pesticide-free, and many foods, including cauliflower, cabbage, beets, turnips, eggplant, okra and onions, are grown in the fields.

Where the farming innovation seems to be at its peak is inside their 10,000-square-foot greenhouse where everything – including tomatoes, lettuce, kale, basil, watercress and cucumbers – is grown hydroponically, without chemicals or fungicides. Sitting on about ¼-acre of land, the greenhouse produces as much as is traditionally grown on three to five acres.

“Here we are able to optimize space and light. The reality of our climate is that it’s important to control temperatures so that we can get the most from the sun without extreme heat,” says Elan.

What does that mean for a single head of lettuce?

“In the greenhouse it takes just one gallon of water to grow a head of lettuce where outside in the field it takes 60-80 gallons,” says Aaron.

“It presents a whole new set of challenges, but it also mitigates risks and challenges that field production faces,” says Elan. “You can read about it in books, but until you do it, you just don’t know. We are constantly trying to find the most efficient plant and system for producing quality and flavor.”

And if you’ve ever thought that hydroponically grown food might have less flavor that food grown in soil, you will have to put that idea aside.

“Just because something is grown hydroponically does not guarantee that it will taste good or bad. This is where the human touch and the grower can have influence. There are so many factors that can determine flavor and overall quality: temperature, variety, harvest date, storage, etc.” says Elan.

In fact, flavor was a key factor that drove Aaron to discover the Beit Alpha cucumber.

Small, about 4-6 inches, with thin skin, no seeds, and a sweet, delicate flavor, the Beit Alpha cucumber has its origins in Israel. Snack on them whole, pickle them, use them in any fresh salad, or enjoy them in a rice paper spring roll.

But beware: one taste and you might get hooked. Luckily, since they are grown in the greenhouse, they should be available nearly 10 months of the year. Although this is Silver Leaf’s first year growing the cucumber, by year’s end they could produce as much as 10,000 pounds, says Elan.

Which brings us to the sensational seasonal Farm Salad created by chef David Gaspar de Alba. Not every farm has a chef, but every farmer deserves to have one, especially peak-season when food is plentiful and the farming muscles are tired.

Gaspar de Alba came to live and work at Silver Leaf Farms one month ago. Originally from the Portland area, he has worked at farm-to-table style restaurants his entire career. In Santa Fe he worked closely with local farmers, but when he was ready for a break from the restaurant scene, he decided to learn more about growing food. The opportunity to live and work on the premises of Silver Leaf Farm has been a perfect match for everyone.

“All the vegetables in this salad were grown within 200 feet of our kitchen, and the ingredients were harvested 10 minutes before preparing the salad. Add to that the wonderful facts that make this farm so unique: everything is sustainably grown, with solar power, pesticide-free, and of course, grown with love,” says Gaspar de Alba. 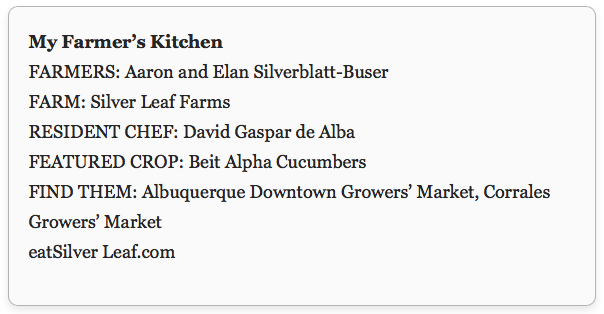 1 English cucumber (or several Beit Alpha), sliced on a bias 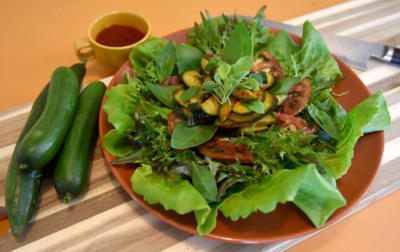 Denise Miller is executive director of the New Mexico Farmers’ Marketing Association in Santa Fe. She writes “My Farmer’s Kitchen,” a column about New Mexico farmers and cooking with them. Visit farmersmarketsnm.org.