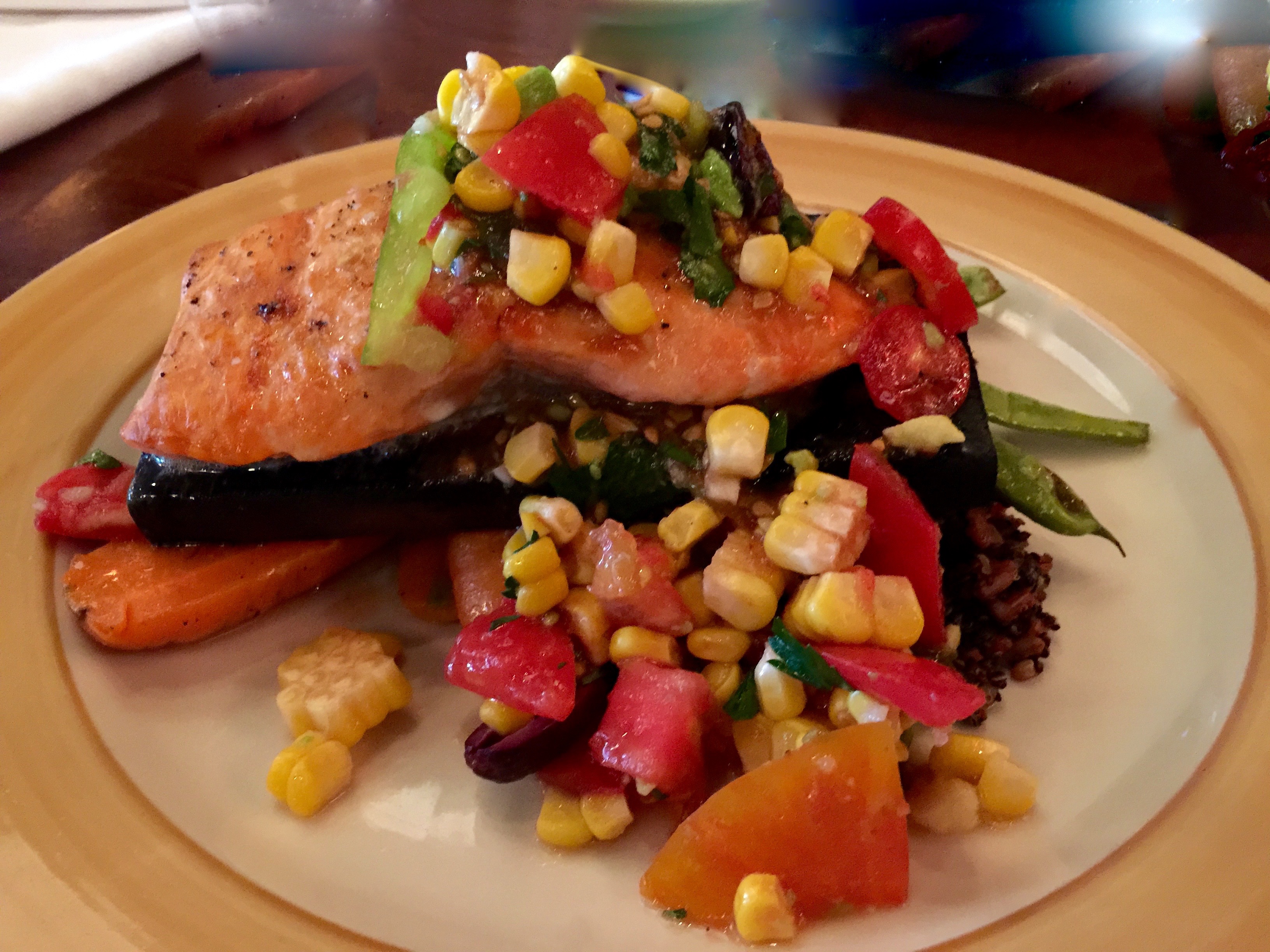 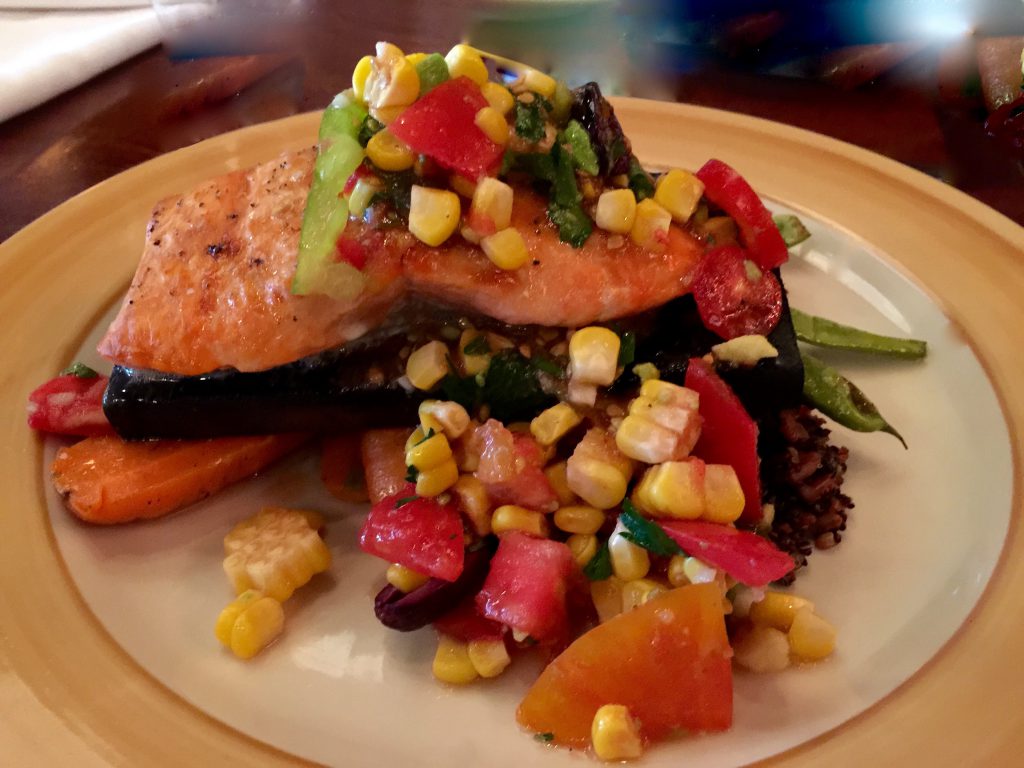 By Denise Miller / For the Journal
Published: Wednesday, October 21, 2015

We’re all still learning how to make locally grown and raised foods a significant part of our diet, but Executive Chef Chris Pope at Zinc Wine Bar & Bistro has some pretty clear ideas of how to make it work in his restaurants.

It doesn’t hurt that he’s been doing it in Albuquerque for 20 years and before that in Boston and California.

Like many chefs and locavores, his love for fresh ingredients started at a young age. “My mother had little backyard gardens when I was growing up so I was always eating fresh carrots and fresh beets. And in the Buffalo, N.Y., community they had farmers markets and huge stalls with local pork, meat and chicken. It was one of those old Polish communities where you could get stuff from the surrounding countryside,” he says.

Pope’s early career took him from the Marine Corps and culinary school at Johnson & Wales University in Rhode Island, to working with plenty of great chefs who influenced his desire to cook with local ingredients.

Many of the lessons Pope has learned in the restaurant world are equally true for home cooks.

“There are so many advantages to using local food. The food tastes better. The food looks better. You don’t have to do as many things to cover up the food because it is all about the carrots or the braised greens or the flavor of the tomatoes. You can keep it simple because those basic ingredients stand for themselves,” he says.

Located in Nob Hill, Zinc is part of an Albuquerque restaurant trio that includes Savoy and Seasons. In addition to his role as the executive chef at Zinc, Pope also acts as corporate chef for the group.

He provides feedback to the chefs on their seasonal menus and leads the group when working with purveyors and farmers to establish prices and contracts. While each chef purchases food for their establishments, it is helpful to have the purchasing leverage of the group. 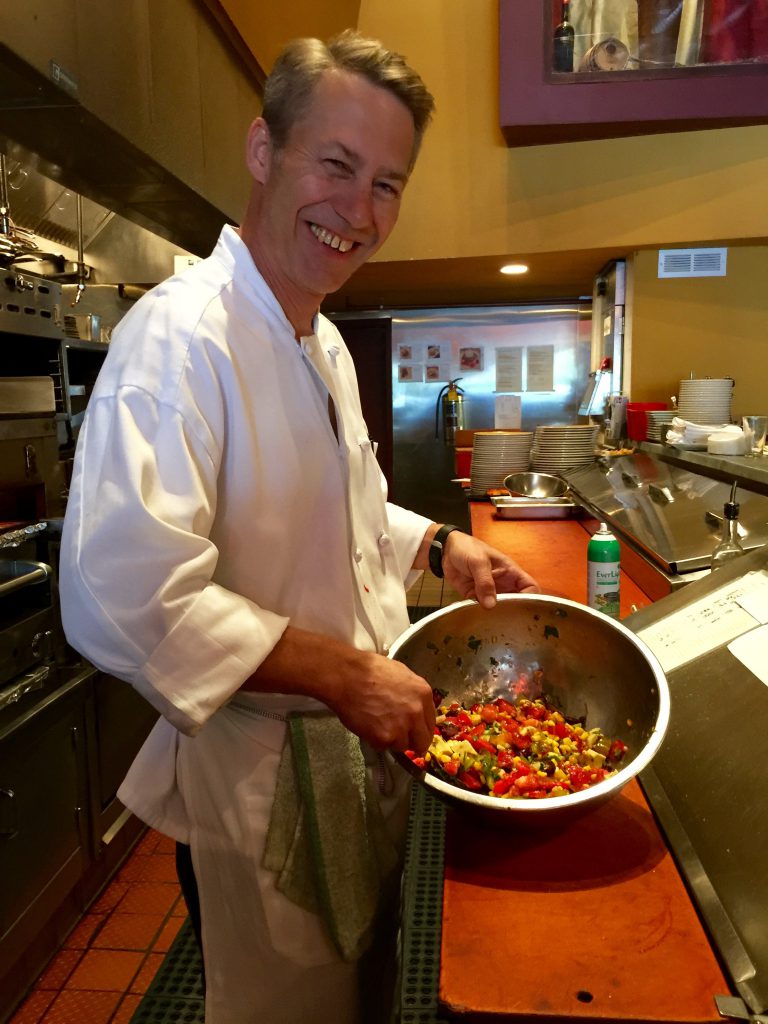 Executive Chef Chris Pope of Zinc Wine Bar Bistro tosses a relish with local tomatoes and corn along with avocado and olives.

Pope is candid when he explains the price dilemma concerning local food for chefs and restaurants. “We have to find the middle ground with farmers for price. We want to use their product, and at the same time we are a business, and we have a certain price point that customers will accept, especially in Albuquerque.”

That’s part of the learning process between farmer, chef and sometimes the wholesaler. With Pope, who has long-standing relationships with area farmers, they talk honestly about the price they need to make the relationship work.

“We try and use as much local produce as we can, when it’s available, whether it’s on the menu or in specials. That’s why I’m working with farmers to try and stretch out the shoulder seasons. If we can add food in November and December and add early spring, it helps stretch the income for farmers and stretch the season for customers,” Pope says.

For example, Seth Matlick of Vida Verde Farms in the North Valley planted a fall crop of chard, braising greens and root vegetables, that was starting to come in at the end of September.

Pope is developing a relationship with ARCA, an organization that works with individuals with developmental disablities. Pope says they are expanding their farming operation and he has been talking to the farm manager.

“I hope we’ll be able to take advantage of their desire to expand with hoop houses and other season extensions. Maybe we’ll start getting herbs in the winter and lettuce from their greenhouse during the winter so that I don’t have to get my lettuce from California,” he explains.

The list of produce coming in from his farming partners is impressive, but what stands out are the unusual products: sunflower shoots, pea tendrils, purple tatsoi, green cayenne, fig leafs, and mustard and radish flowers, to name a few.

Pope experiments with new products like the fig leafs, which he steeped in boiling water and then used in a port wine sauce. The mustard and radish flowers, he used as a salad garnish or on top of fish. It’s easy to see this longtime chef is still excited by food.

Pope is a natural teacher as he takes the time to describe various techniques any cook can master to enhance the natural flavors of locally grown ingredients available at local growers’ markets, select retailers or from one’s own backyard.

For example, when putting together his vine ripe tomato salad, Pope suggests slicing the varied colored tomatoes differently to add visual interest to the dish. He also likes using fresh orange zest and tarragon. Both flavors pair well to bring out the sweetness of the tomatoes.

The result of his farm fresh cooking is perfection: tomatoes that sing and bring out the nuttiness of the quinoa, all while calling attention to individual ingredients like the carrots and string beans.

Pope still cooks on the line six nights a week. When customers sit at the counter of the exhibition kitchen they often ask him questions. If he’s not trying to cook for 140 people at the moment, he does his best to answer. 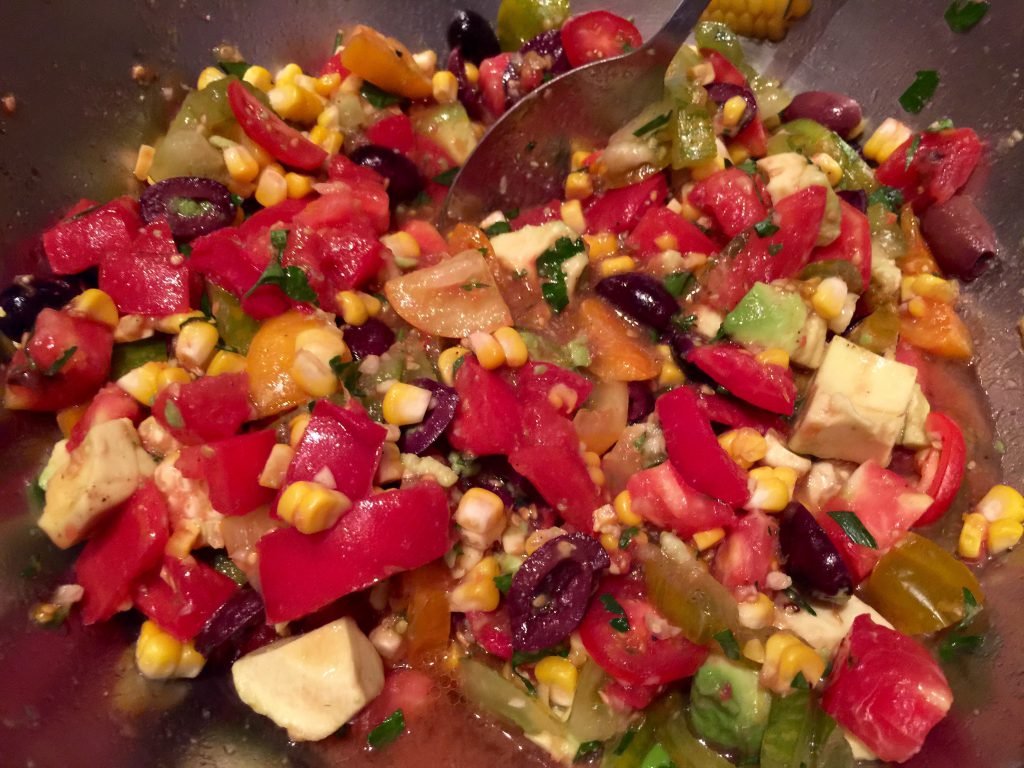 Corn, tomato, avocado and olive relish uses orange zest and juice to draw out the fresh flavor of the vegetables. (Denise Miller/For the Albuquerque Journal)

LOCAL TOMATO AND CORN, WITH OLIVE AND AVOCADO RELISH

Salt and pepper to taste

Cook corn on the cob in salted water with a tab of butter and a drizzle of New Mexico honey. Allow to cool, then cut off cob.

Add avocado and olive oil. Season with salt and pepper. Toss or fold gently, so that the avocado does not break down.

Salt and pepper to taste

Cook cup of quinoa, following the recipe on the box.

Cook cup of jasmine rice, following the directions on the box.

Combine the rice and quinoa, season with salt and pepper, then reheat the pilaf with 2 ounces white wine.

Blanch baby carrots and string beans in boiling salted water. Shock them in an ice bath to stop cooking.

Reheat both the carrots and beans in the butter and season with salt and pepper to taste.

Plating: While the fish is cooking, warm the pilaf. When the fish is done, put pilaf on the plate, then the vegetables. Next lay the plank with the salmon right on top of these two. Lastly, finish the salmon with a generous spoonful of the relish.

Serves 8 portions of 6 ounces each

Salt and pepper, to taste

Soak cedar plank in water for at least 2 hours before grilling.

Place salmon under a preheated broiler or in an outdoor barbecue grill with the lid closed. The fish should take 7-8 minutes to cook.