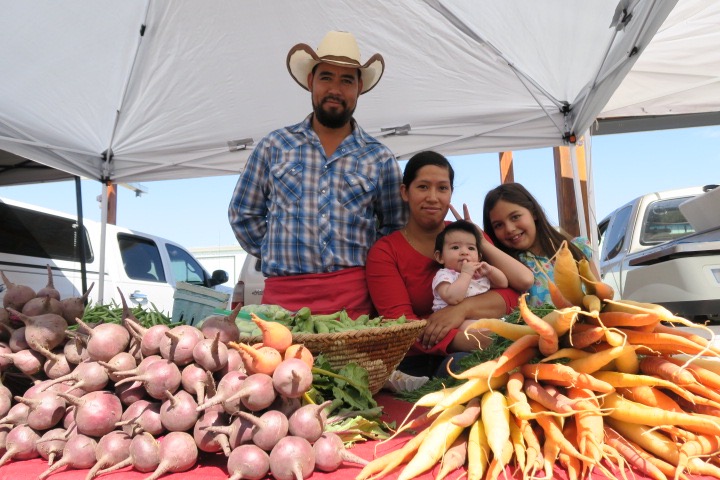 The ways in which we get food into our kitchens varies, from growing our own, to buying from farmers and ranchers, to visiting local grocery store chains. But significant changes are coming to our food supply system. How will you shop to get the freshest, best tasting, healthiest foods for you and your family? A quick look at the history of food shopping provides an interesting vantage point from which to think about some of the most interesting changes to hit the food industry since the early 1900s. 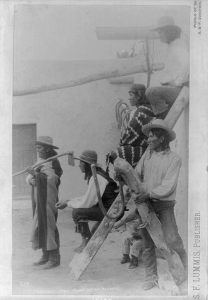 Pueblo of Isleta farmers, about 1890. (Photo by Charles F. Lummis. Library of Congress.)

People have been trading for food and other goods for thousands of years, and farmers’ markets have been around since there have been farmers that wanted to sell the surplus food they grew. In New Mexico, El Camino Real de Tierra Adentro linked Native peoples from Mesoamerica with Santa Fe and other Native groups in the Southwest. They traded goods, information, crafts, livestock, and crops (read more about El Camino Real). As European influence increased, food trades became more specialized, and people bought from or traded with farmers, dairies, butchers, bakers, cheese shops, and grocers, who used to sell only nonperishable dry goods such as spices and canned food.

The first self-service grocery store, a Piggly Wiggly, opened in 1916 in Memphis, Tennessee. The store made customers choose their own foods, thereby decreasing the need for clerks and expanding the types of foods sold to everything from spices to bread, to meats and canned goods, and more.

The Next Wave of Grocery

There’s another shift in food shopping on the horizon, which has been spawned by Amazon’s purchase of Whole Foods in 2017. Changes after the purchase were quickly evident, such as Amazon selling some of Whole Foods’ “365 Everyday Value” products on its website, and Amazon Prime members getting deep discounts on things like turkeys and roses. And as of February, Amazon Prime members can get free two-hour delivery from Whole Foods; this service started in Austin, Cincinnati, Dallas, and Virginia Beach, with expansion planned in other areas of the US. In a culture that is in a race to decrease the amount of time spent on food — from cooking it to shopping for it — having home delivery is enticing. 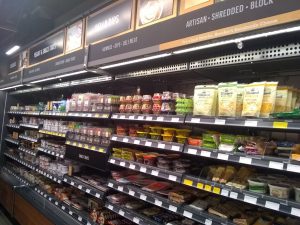 At Amazon Go stores, everything is pre-measured and pre-packaged.

Amazon is also changing the 100-year-old model of grocery stores with its new Amazon Go and AmazonFresh Pickup stores. Amazon Go is a checkout-free grocery model, where shoppers scan the Amazon Go ap on their smartphones at a turnstile when entering the store, place desired items in a bag, and exit the turnstile, which automatically scans all of the food in the bag and deducts the amount from the shopper’s credit card that Amazon has on file.  AmazonFresh Pickup stores operate much like they sound: Shoppers order what they want online, then head to the store to pickup the already bagged items. Amazon is in an “experimental” stage in new grocery store models, including their grocery delivery service Amazon Fresh, which have been open since 2007 but has been slow to expand.

Amazon Go only sells identical items (the same yogurt containers, pre-packaged salads and sandwiches that all weigh the same, etc.) How will people be able to buy fresh fruits and vegetables, which are anything but identical? So far this hasn’t been fully ironed out, but the current way of paying for produce by weight will be out. Also out is the store’s ability (or willingness) to accept SNAP benefits, mostly because SNAP benefits can’t be used for prepared foods, which is the bulk of what Amazon Go will sell.

What does this mean for the next iteration of food purchasing and, especially for fresh fruits and vegetables that are grown by local farmers? Will our food shopping evolve into a system where prepared foods like sandwiches, ready-made salads, and pre-cut and pre-packaged fruits and vegetables are purchased at quick and convenient stores like Amazon Go, or delivered to your door after being ordered online? Will we increasingly desire to seek out farmers and their outlets—farmers’ markets, farm stands, CSAs, and grocery stores and food co-ops that sell local foods—to buy the freshest, best tasting produce so we can choose exactly what we want?

With big changes already happening in the traditional grocery world, now is the time to familiarize yourself with (and support!) New Mexico’s local food producers. Talk face-to-face with local farmers, ranchers, orchardists, bee keepers, cheesemakers, and other food producers by shopping from them at farmers’ markets, farm stands, mobile markets, and CSAs.  For the freshest food you can buy, visit our market locator to find seasonal outlets.

New Mexico’s farmers provide the freshest, healthiest produce you can buy for you and your family.

This is also a great time to familiarize yourself with grocery stores that do sell locally grown and produced foods (again, check our market locator to find the one nearest you). When grocery stores such as Lowe’s on 4th Street, Food King, La Montañita Co-op, Cid’s Food Market, Dixon Cooperative Market, or Taos Food Co-op buy locally they are investing in the local economy and community. This means your food dollars remain in circulation in-state instead of supporting corporations located out-of-state. It also means you retain the choice for fresh, locally grown and produced fruits, vegetables, meats, dairy, and more.

Ultimately, it’s always been important for people to have access to fresh, locally grown food. And now, with all the changes in grocery shopping, it’s good to know that New Mexico farmers are still here, growing healthy food for you and your family. Buying local helps make sure we don’t lose this privilege.