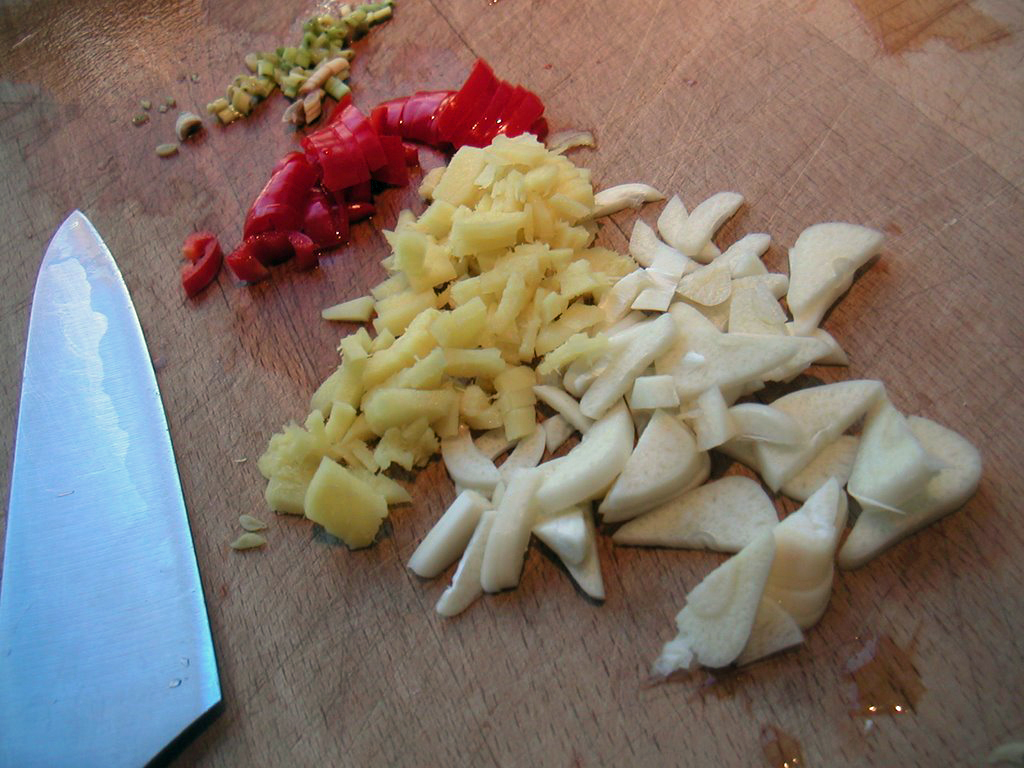 We live in a time when recipes are everywhere, yet fewer people cook meals at home than ever before. We’re cooking less not only because it’s tough to put a balanced meal on the table after work, but also because many lack the knowledge necessary to know what all of those instructions in recipes mean. It only takes one generation to lose cooking skills in a family; if you were not taught to cook, there is no reason you should be expected to know how.

If you’re new to cooking, or just want a quick refresher, here are 20 terms frequently used in recipes; learning what they mean can help turn you from only a recipe fan into a cooking fan.

Al dente: This term refers to foods that have been cooked in a liquid (usually water) until just firm to the bite. “Al dente” is usually reserved for cooking pasta, but is also seen in recipes for cooking rice.

Boil: Water boils at 212 degrees Fahrenheit at sea level (for every 500-foot increase in elevation, lower the boiling point by about 1 degree Fahrenheit). Boiling has bubbles that travel from the bottom of the pan to the surface of the water, in rapid succession. When the bubbles are more energetic and difficult to see individually, it is called a “rolling boil.” 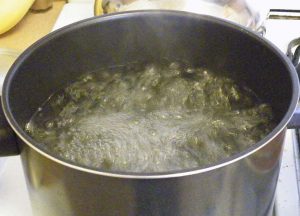 Boiling water is distinct from simmering (simmering is better for cooking most foods). (Photo source)

Broil: Broiling involves cooking something with direct, intense heat. This term is usually reserved for a heat sources that is directly above the food being broiled, though occasionally you will also see “broil” in conjunction with grilling. Broiling is frequently associated with cooking meats, or finishing off a dish where a browned top is desired. Most ovens have a “broil” setting.

Braise: This is a very specific cooking technique, and if not performed correctly, can throw off a recipe. To braise meat, fish or vegetables, sear it first in a fat (like butter or oil) and set aside. Then sauté mirepoix (see below) in the same pot, deglaze (see below) the pan with your braising liquid, and return your meat, fish, or vegetables to the braising liquid, cover your pan, and simmer it gently until cooked. The quantity of each ingredient will be specified in your recipe, but the key here is to not use too much liquid, and to cook it on a lower heat.

Bouillon: Bouillon is a seasoned broth, but the term can be used interchangeably with pre-seasoned cubes wrapped in foil or jars found in grocery stores that are used to make a seasoned broth. (Check this out to learn how to make your own prepared bouillon, and read this to learn the difference between  broth, consommé, bouillon, stock, soup, and stew.)

Chop: This is a general method for cutting food into bite-sized pieces (about 1/4-inch in size, or the thickness of a pencil). A large-bladed chef’s knife is helpful for chopping, dicing, and mincing When a recipe calls for finely chopped, aim for pieces about 1/8-inch in size (or half the thickness of a pencil). When the recipe specifies a coarse or rough chop, chop larger pieces (but no more than about the size of a quarter). Cooking times impact how quickly the size of the chopped food will cook, which is why it’s important to chop approximately to the size called for in the recipe. 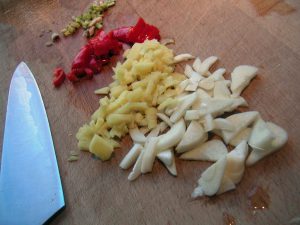 Chopped vegetables vary in size from between 1/4 inch to about an inch. (Photo source)

Deglaze: This technique is used in many recipes, including those calling for braising (see above). Deglazing involves adding wine or another cooking liquid into a pan in which meats or vegetables have been browned (the browned meat or vegetables are removed from the pan before deglazing). After adding the liquid to the still-warm pan, use a wooden spatula (to ensure that your pan is not scratched), to scrape the bottom of the pan of its burned bits, and stir them into the liquid. The result is a full-flavored sauce for your meal.

Dice: Dicing is similar to chopping, except dicing is always finely chopped, consistent in size, and neat in appearance. It’s the precision of the cut that distinguishes dicing from chopping. Feel free to finely chop for home recipes.

Julienne: To julienne is to cut food (usually vegetables), into match-sized pieces. This can be very time consuming and is generally unnecessary in the home kitchen; chopping is a time-saving alternative.

Mince: This is the finest level of chopping, and is frequently done using a food processor, or a sharp chefs knife. Mincing is a technique that allows the maximum amount of flavor to be contributed by the mined food; frequently the minced vegetable is chopped so finely that it “melts” into the dish. Mincing will definitely impact the taste of the food, if called for in a recipe. 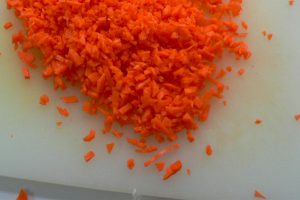 Mincing is the finest level of chopping. A food processor can be used to mince vegetables. (Photo source)

Mirepoix: The French name for this technique sounds fancy, but it provides a deep flavor to recipes that you won’t want to miss. Mirepoix always includes two parts onion, one part carrots, and one part celery (so, 2 cups onion, 1 cup carrots, and 1 cup celery; or 1 cup onion, 1/2 cup carrot, and 1/2 cup celery; etc). The technique involves chopping (see above) all three and either adding them directly to soups and stews, or sautéing them over low heat in oil until they start to release their juices. The recipe you are following will direct you to the method of choice.

Muddle: You’ll see this word in drink recipes, such as mojitos. The technique involves pressing the herb, fruit, or other ingredient into the glass with a spoon or wooden muddler, which looks like a pestle of “mortar and pestle” fame, until it is mashed or crushed. Muddling releases delicious flavor, and most recipes won’t reach their potential if someone chooses to misses this step.

Puree: Purees are cooked vegetables, beans, or fruits that are mashed either by crushing or beating, either by hand or with a blender, food processor, or other mechanical means. Purees are meant to be very smooth, like applesauce.

Roux: Used to thicken sauces, soups, and stews, making a roux involves cooking equal amounts (by weight) of flour and a fat together until smooth. There are three types of roux. 1) A white roux is cooked briefly over medium heat until the flour and fat are combined evenly, then removed from heat while it is still pale in color. 2) A blond roux is cooked a few minutes longer until it develops a bit of color. 3) A brown roux is cooked until it is caramelized to a lovely brown color, which imparts flavor to dishes as well as thickening power. 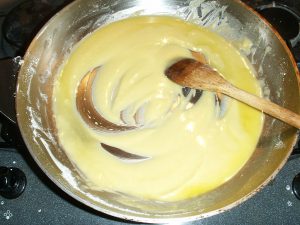 A white roux is cooked and stirred just until the flour and butter are fully incorporated; it is removed from the heat while still pale in color. (Photo source)

Reduce: Reducing involves thickening and enhancing flavors in liquids (soups, wines, vinegars, sauces, etc.) by simmering (not boiling) over medium heat. You will need to stir the reducing liquid to prevent it from burning. The recipe will indicate how much to reduce a liquid, though “by half,” is very common.

Sauté: Sautéing involves cooking food over medium to high heat, and without using too much fat (as you might with a deep fry). Depending on what you are cooking, the food may need to be stirred constantly, to help prevent burning. If you are sautéing chicken, for example, the desired affect may be a browned skin.

Simmer: While boiling (see above) takes place at 212 degrees Fahrenheit at sea level, simmering occurs at between 180 and 190 degrees Fahrenheit at sea level. When a liquid is cooked over a low heat and there are almost no bubbles that break the surface, they are simmering. Simmering is a gentle cooking method that preserves the flavor and texture of foods. When in doubt, always simmer foods instead of boiling them, which can negatively impact nutrition, texture, and tenderness of food.

Sweat: In cooking, sweating is a term reserved for vegetables that are cooked over low heat in a little oil or butter. The vegetables give up their moisture to the pan, and frequent stirring allows the excess moisture to evaporate. Onions are frequently sweated to the point of being translucent. The recipe will indicate how long to sweat vegetables, and what the desired outcome should be. 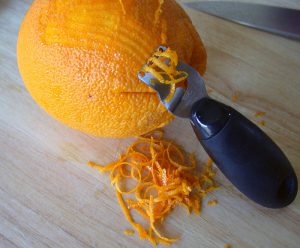 While there are specialty tools for zesting citrus, a sharp paring knife can also be used. (Photo source)

Whisking: While a whisk is a tool, it is also a stirring or mixing technique. Whisking, or whipping, involves very rapidly mixing ingredients to incorporate enough air to make the mixture light and fluffy. Whisking can be achieved using a fork or a wire or plastic whisk. Whisking is a term most often seen in baking recipes.

Zesting: Zesting creates a cooking ingredient scraped or carefully sliced from the colorful surface of citrus fruits, like oranges, lemons, and limes. It’s important to only use the colorful parts of the skin; the white part of the skin is bitter. While there are specialty tools for zesting citrus, a very sharp paring knife can also be used to remove the zest, then slice it into small, thin pieces for the recipe.