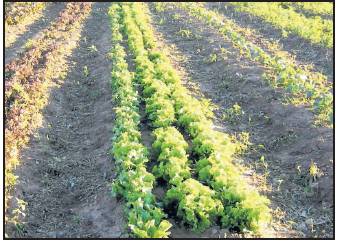 Lettuce at Richard Belanger’s Ganados del Valle Farm in Los Ojos was snapped right up for the Farm to Cafeteria program. COURTESY OF RICHARD BELANGER

As cooler weather settles in, look for October farmers’ markets to bring more foods that enjoy a light frost like chard, spinach, kale and winter squash. Salad greens should still be plentiful, along with carrots, beets, potatoes, turnips, Jerusalem artichokes and the last of the season’s fresh chile.

Many markets have shortened hours and/ or close for the season during October so be sure to check the accompanying market schedule before you go.

This month also is National Farm to School Month, a program that in New Mexico brought locally grown produce to more than 240,000 students during the 2012-13 school year. That’s more than 60 school districts purchasing more than $500,000 in farm fresh produce.

Big and small schools districts alike are hopping on the bandwagon, according to Shauna Woodworth, who coordinates the Farm to Cafeteria program for Farm to Table, a local nonprofit.

“Between recent federal changes to school nutrition standards and money that the New Mexico Legislature has begun to appropriate for locally grown produce for school meals, we’re starting to see a shift in the way school food buyers approach the idea of adding locally grown food to their menus when possible,” says Woodworth.

Just ask Betty Ulibarri, food service director for Chama Valley Public Schools. This year she started buying locally grown produce when by chance she met local farmer Richard Bélanger at the Los Ojos Farmers’ Market. After visiting his farm with other food service directors, Ulibarri decided to buy as much lettuce mix and spinach as she could from him. “If he picks today, I will get a delivery this afternoon. That’s what I call fresh.”

Kids eating fresh spinach? “We just mix the spinach in with the lettuce for the salad bars at both the middle and high school,” says Ulibarri. “There’s hardly any waste at all.”

“There are still a lot of details to work out — delivery, quantities, prices — but beyond the money, it feeds a population that really needs it. It is a big step here,” he says.

Then there’s Betsy Cull, assistant director for student nutrition at SFPS. With about 13,000 students in her district, she implemented a bidding process for local produce that includes a wide variety of crops that might be purchased on one bid. This allows specialty crop farmers, who may not individually have huge quantities, to participate in the program.

After farmers are approved, they can supply the needed quantities of crops that they have. Smaller school districts can also use this same bid to avoid the time it would take for them to get farmers approved.

So far eight other have school districts have taken advantage of this bidding process to get locally grown food into their schools. Cull estimates that she spent about $40,000 on locally grown produce last year.

“When we have local apples, I hear the kids can’t stop eating them. When we don’t have them anymore, the apple intake decreases quite a bit,” says Cull.

Apples have been a mainstay of New Mexico’s Farm to Cafeteria Program for the past decade, but this year’s widespread spring frosts killed most of the crop.

Since school started in August, Cull has purchased a wide variety of locally grown produce including lettuce, cucumbers, squash, tomatoes, onions, cantaloupes, watermelons and honeydews. Local food only accounts for 1 percent to 1.5 percent of her overall food purchases, but she says she likes making people aware there are local food options being offered in the schools.

“I feel it’s important to support our local economy and that kids need to know what food tastes like when it was picked yesterday,” Cull says.

It takes a lot of work and dedication to get local food into the schools, but if you ask school food buyers, nutritionists, students and farmers, they’ll all tell you its well worth the effort.

VEGETABLE PAELLA – In honor of National Farm to School month, this recipe for vegetable paella is brought to you by Cooking with Kids, a local nonprofit that provides more than 5,000 Santa Fe schoolchildren with experiential food and nutrition education curriculum. Not only will kids love to eat these foods, but also they will love to help prepare them!