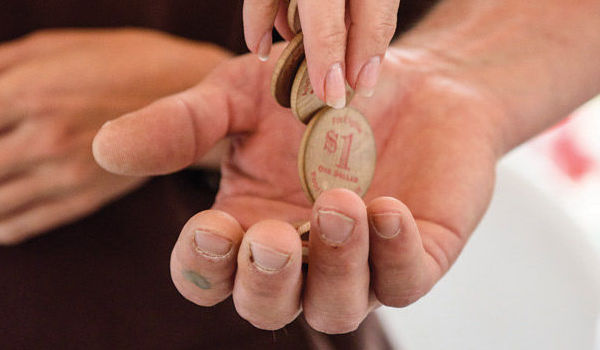 BY CODY HOOKS FOR THE TAOS NEWS 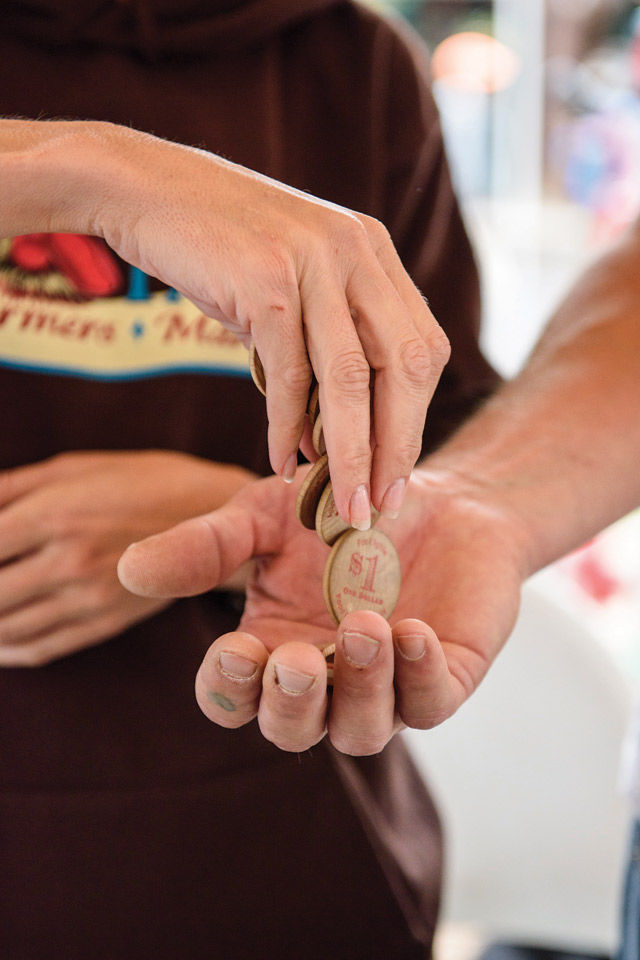 The Taos Farmers’ Market gives out wooden and metal tokens to use as part of the Double Up Food Bucks program. The program gives people on SNAP double the money when spent on New Mexico-grown produce. (Katharine Egli)

One of Taos’ greatest assets is its deep agricultural tradition. But organic, healthy, local food can sometimes be pricey, especially for low-income families on tight budgets and with limited time to shop around.

The whole program is designed to make the experience as user-friendly as possible, said Lucy McDermott, program specialist with the New Mexico Farmers Marketing Association (NMFMA).

When someone uses their EBT card at the farmers market, they get wooden tokens that can be used with most market vendors. With Double Up, they get double the tokens. At stores, the Double Up money is tabulated over the EBT card system.

Taos is a hot spot for the program among locations in New Mexico. In addition to the Taos Farmers Market, Double Up can be used at the Red Willow Market at Taos Pueblo, Back Porch Farmers Market, Cid’s Food Market, Taos Market and Taos Food Co-op.

The program doubles the buying power of low-income folks and also serves to bolster the region’s agricultural economy by increasing the sales of local farmers.

Josh Cunningham, marketing director for Cid’s Food Market, told The Taos News that Taos County has been the “epicenter of a local agricultural renaissance” over the past few decades. And with so many local farmers throughout Northern New Mexico, Taos is fast approaching the time of year when people can get the most mileage out of the program.

“When the end of July comes around, we’ll have boxes of green chile and all the local produce. Double Up Food Bucks is running all year, but come in now,” he said.

Across New Mexico, the program is also growing substantially. According to McDermott, the program was used at 33 locations last year. So far in 2016, there’s 87.

NMFMA is aggressively trying to make the program adapt to the infrastructure already available in communities. “Our interest is in accessibility for the consumer and supporting local farmers. We’re getting greater access for shopping hours,” McDermott said.

Cid’s launched Double Up at the beginning of June, Cunningham said. Setting up the program “involved some technical mojo” and assistance from La Montañita Co-op, which shares the same point-of-sale software. “We spent about a month getting the technical end ready and waiting to see what sort of bugs they have in their system,” he said.

Because not all of Cid’s produce counts for the Double Up program, the store has also started labeling eligible New Mexico-grown produce with the Double Up logo.

So far, it seems to have been a success. “Everyone’s really excited about it,” Cunningham said, though he couldn’t offer specific sales figures.

“It’s helping the farmers, helping customers who are low income put food on their plates and [attracting] people who don’t normally shop here,” he said. “It’s great seeing people using Double Up to its fullest extent.”

Numbers haven’t been tallied for the Taos Farmers Market yet, but Chris Lee, who owns Llanobilly Farm and works for the market, said the program has seen rapid success.

SNAP sales stand at about 6 percent of all vendor sales at the Taos Farmers Market, which is the fourth-largest farmers market in the state in terms of gross sales, Lee said.

Taos County has about 6,500 SNAP participants, or about 19 percent of the population, Lee said.

Lee told The Taos News the Taos Farmers Market is blasting the area with radio ads and putting up signs around town in order to get the word out. And Cid’s is handing out informational postcards and 10-page packets explaining the program.

The expansion of Double Up is thanks largely to a $2 million grant from the federal government, which was announced in June. The grant will be spent over four years and comes from the U.S. Department of Agriculture’s Food Insecurity Nutrition Incentive program, according to the NMFMA.

Furthermore, the New Mexico Legislature will contribute $390,300 a year for the next four years, NMFMA said. Double Up started in Michigan with the Fair Food Network.

Find out more at doubleupnm.org.